skip to main | skip to sidebar

If you'll please glance immediately to your right, you'll notice a new poll. It's pretty much self explanatory. We're trying to name baby boy. Our Scarlett was (obviously) named after Scarlett O'Hara, so to give baby boy a random name without meaning seems cruel. Below you'll find our reasoning behind each option. Please vote. But be warned, you can only vote once (maybe twice if you vote from work and from home) so make it count! I'll take votes from complete and total strangers too, so if you know any of those feel free to pass on this blog address so they can share their opinions...anonymously.

Our choices...
-We like Pierce. It's a name that everyone has heard of - but yet no one knows a Pierce (at least we don't). We figure you can't go wrong with a guy that played James Bond.

-When I read this on the cover of The Catcher in the Rye I was hooked on the name Holden, "perhaps the safest thing we can say about Holden is that he was born in the world not just strongly attracted to beauty but, almost, hopelessly impaled on it."

-And oh. Harrison. I love George Harrison. He's my favorite Beatle. And he wrote the song "Here Comes the Sun" which is quite possibly my theme song to life.

So there they are. Vote away...please. We need your help.
Thanks!

Well folks, I've officially entered the third trimester. In about 11 weeks, baby boy will be joining us. Scarlett has taken a pretty active interest in "baby brother" - as you can see by these photos. 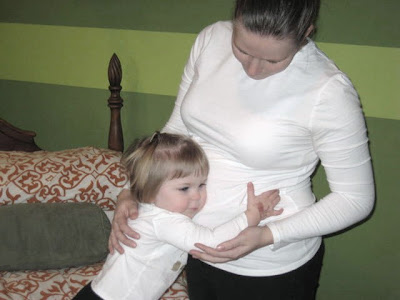 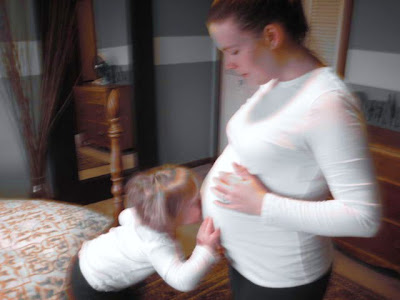 It's actually quite cute. If asked where her baby brother lives, she'll point to her belly and do this... 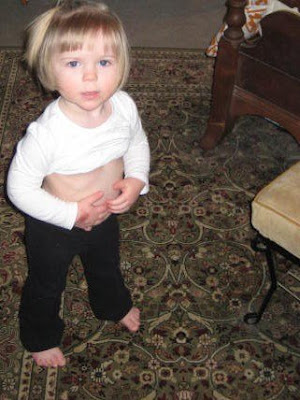 But if you ask her where mommy's baby brother lives, she'll do this... 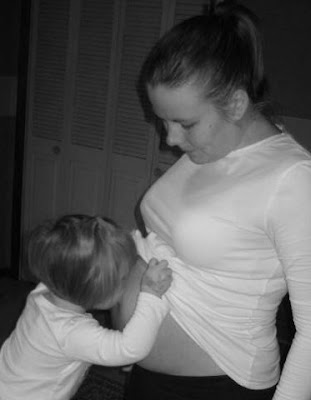 Scarlett had a really cute set of Sesame Street finger puppets that came with a Sesame Street book that her Aunt Stephanie and Uncle Craig got her. Unfortunately, she lost the Cookie Monster puppet awhile back. Tonight, she randomly decided she was going to look for him.

While I did say we rode our quad...I never said we rode it well.
Luckily we've got roughly 14.5 years before we have to start worrying about a driver's license. 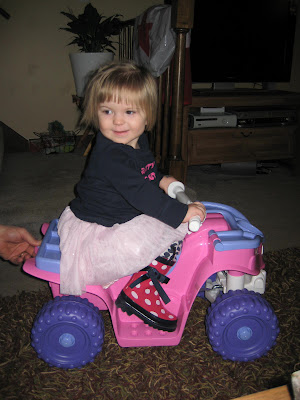 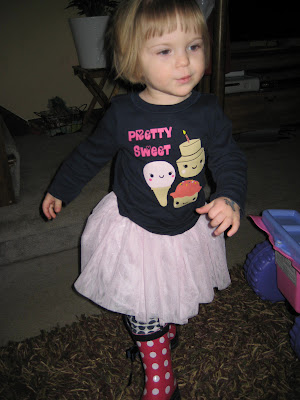 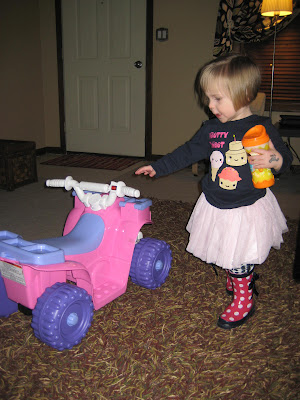 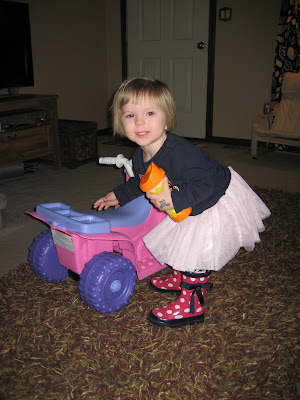 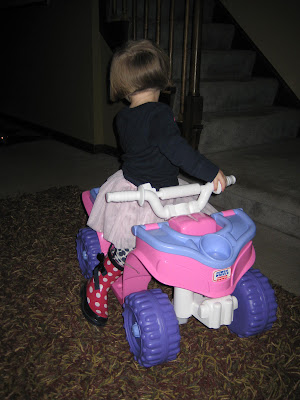 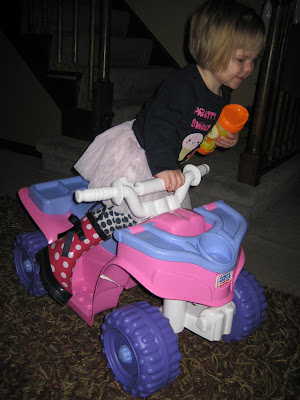 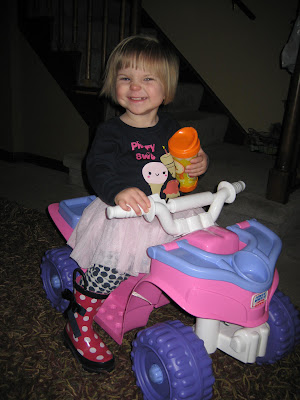 I'd like to personally thank you, Burger King right down the street, for not only providing convenient food, but for providing a convenient play space for both my daughter, and husband. Now, not only do I not have to cook, but I don't have to entertain either. I can eat my french toast sticks and my hash browns in complete and total peace while Bubsy and Joe are behind the walls of a giant, life sized hamster cage. (Thank you.) 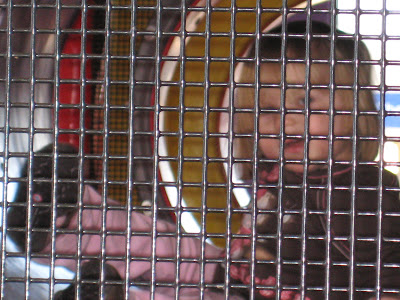 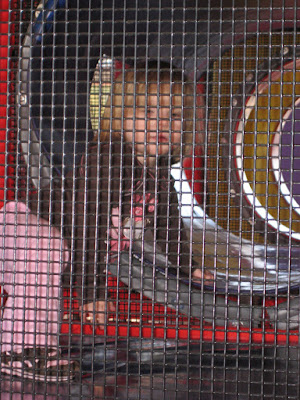 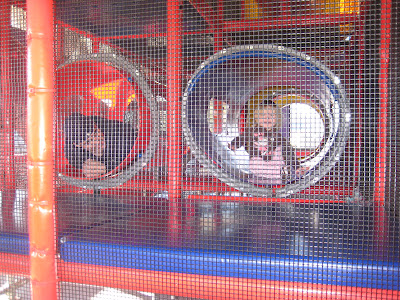 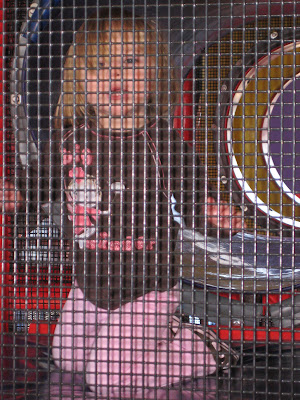 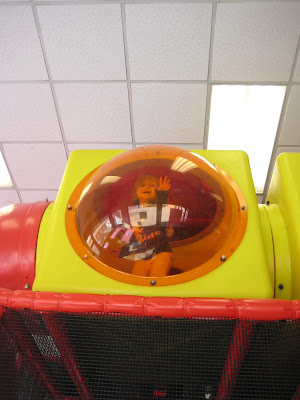 I had to post some of the things that Scarlett said last night. If I don't post them I'll forget about them in a few weeks and they'll be lost forever.

We got home from work/daycare last night with enough time to play outside for a bit. (Joe has school and was gone for the night.) We were in the front yard poking a snow pile with a stick. After about 20 minutes of poking, a helicopter flew by. Scarlett looked everywhere (well...everywhere but up) trying to determine where the noise was coming from. I pointed to the sky and showed her the helicopter. She watched it smiling until it flew out of sight. Then she said "more cockie-copter."

Then we went inside and put on pj's. We cuddled up and watched 101 Dalmatians. In the movie, the puppies are born and you get to see one of them as a very young, just born puppy wrapped up in a blanket. Without any prodding, Scarlett pointed at the newborn puppy and said "baby brother." No lie. I may have teared up a bit. Although, please God, I hope her baby brother doesn't have four legs and a tail.

Scarlett has been crying herself to sleep (that sounds really dramatic but it seriously only takes her about 4 minutes) the past few nights because Joe has been at school and isn't saying good night to her. I follow the same routine as always, but when I walk out the door she starts crying and asking for "dada." It's heart wrenching. There are a few things that Scarlett can say that will get Joe and I's instant attention. Turns out, she knows this. Those things are as follows; "poopies," "stuck," "tissue." Last night after I put her to bed, in a desperate attempt to get someone to come back into her room, she said all three. It sounded a little something like this;
"dada poopies, dada poopies, poopies, dada poopies...dada stuck, stuck, dada stuck, wah, dada stuck...(and then, my favorite) dada boogies nose, dada boogies nose, wah wah, boogies nose, dada boogies nose." Despite her utter grief, it was hard not to snicker at the sheer brilliance of her attempt to get someone - anyone back into her room. My poor, boogies nose baby.

Walking a mile in mommy's shoes

I'm going to explain to you a bit about what Scarlett is saying as she's sitting on the floor in this video, just about at the 40 second mark. It's a good look into a daily battle we have with Scarlett. When we get home from work/daycare, Scarlett requests the same "Abby" DVD...everyday. Abby Cadabby is a character from Sesame Street, and Scarlett worships the ground she walks on. Joe can usually keep her busy before dinner and she forgets that she wants to watch the movie, but during dinner our conversation goes from "how was your day?" to "where is Abby Cadabby?" Joe and I have created a diversion, and we think it has worked. During dinner, Abby Cadabby is "nuh-nights." She sleeps while we eat. Simple enough, right? Scarlett has caught on - and actually tells us now that Abby is sleeping instead of asking us to put the movie on. This video was taken right after dinner (explaining the spaghetti sauce on Bubsy's shirt and face). At the 40 second mark you'll hear Scarlett telling Joe that Abby is "nuh-nights" because it's "beh-hast" ("beh-hast" is Scarlett talk for breakfast...which to her, is every meal). Joe and I may have won this one, folks. I'm just dreading the day that Scarlett asks if Abby wakes up when we're done eating.

Something quite sad has happened in our household. Like seriously sad. Sad enough where I could very easily cry if I think about it for too long. Scarlett has outgrown her Kittie Cat rain boots, size extra small, 5/6. 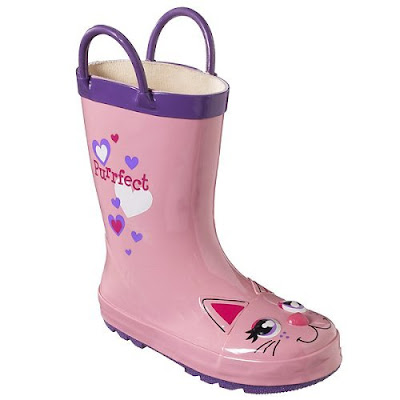 Previously, when asked what shoes she would like to wear, Scarlett would always pull out these boots. I, being a horrific mother, rarely let her wear them in public - let's be honest...the "everyday" doesn't often call for rain boots. The weather has been beautiful recently, and I was ready to let Scarlett go puddle hopping donning these appropriate boots. That's when I made the discovery that Kittie Cat was no longer with us. I am suddenly feeling very regretful. Poor Bubsy loved these boots and I should have let her wear them everyday...or at least more than I did...which was next to never. They didn't go to complete waste though. Many a sleepy Sunday morning was spent hanging out in both pj's and Kittie Cat rain boots. Those will now be some of my fondest memories.
I'd like to introduce you to Kittie Cat's replacement. Not quite as purr-fect, but adorable none the less. Meet Polka Dot rain boots, size small, 7/8. 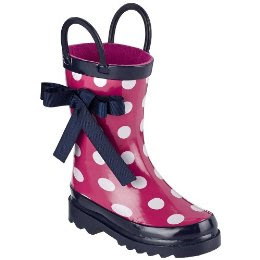 So far, Scarlett has worn them three times in a 24 hour period. If she wants to wear them, I'm going to let her. I'm not making the same mistake twice. So folks, if you see my Bubsy truckin' down the street wearing these rain boots in complete and total non-rain weather - please smile and know that she is the happiest toddler in the world. How can you call that impractical?

Wow it's been awhile since I last posted. We've been busy. We (finally) had our basement finished. Like really finished. It was last "finished" about a year and a half ago, right before Scarlett was born. We insulated and put sheet rock up on the walls and painted, but ran outta money and left the floor concrete thinking that it really didn't matter that it was concrete and we'd just put a giant throw rug down. Yeah...it mattered. We never really used the space - it just wasn't comfortable. The basement would occasionally leak after a heavy rain, so nothing could be left on the floor - including giant throw rugs. BUT...these past few weekends we had a (slightly expensive) sump pump installed AND had the floor and stairs leading to the basement carpeted. What a difference. We're loving the space. So is Scarlett. She points to the basement door now and says "play" instead of pointing to the TV requesting "Elmo" (or "Abby," "Cookie," or "Ah-Ah"- the Count) To Joe and I, this means the basement was a success - and well worth the 5 grand it cost us. (Gulp.) Here are some photos of Scarlett enjoying the new space. 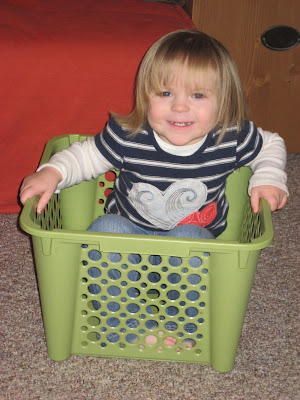 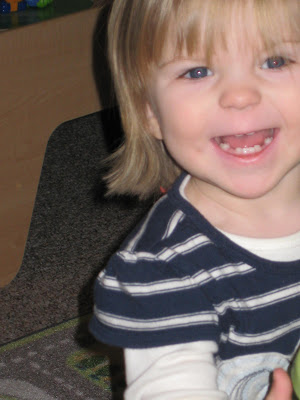 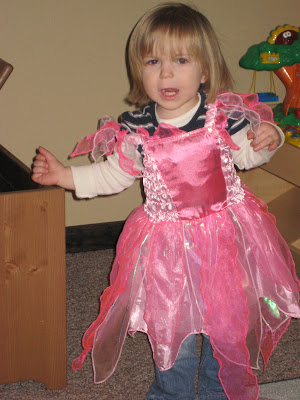 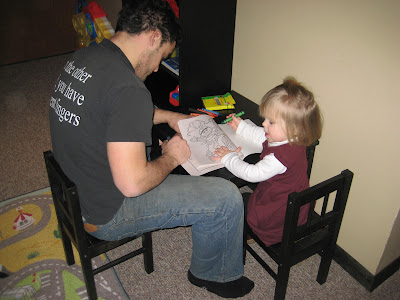 We even had Carson over to play in the new play room. 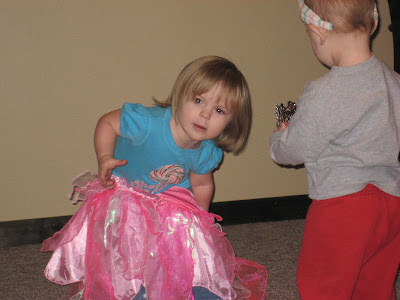 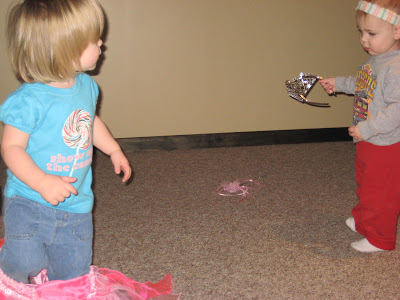 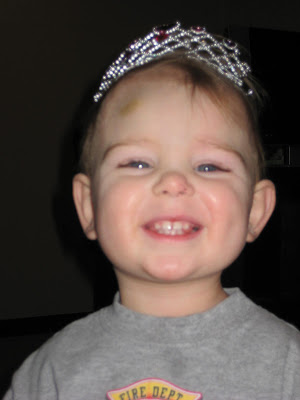 In fact, he likes it so much that he gave Scarlett a smoocheroo at the end of the play date. Val captured it on film and I shamelessly stole it from her blog. Seriously people...how cute?! 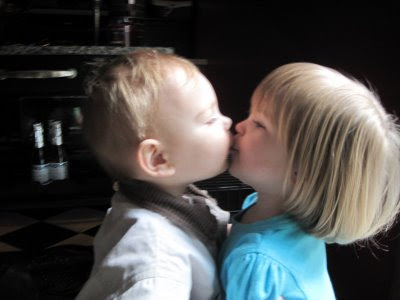 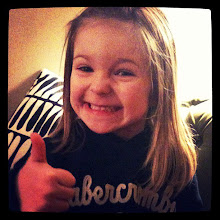 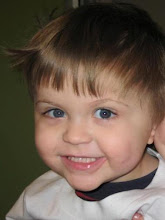